“Pulling” Towards a Paradigm Shift in Marketing | GO MO Group

“It is not the strongest of the species that survive, nor the most intelligent, but the one that is most adaptable to change.” — Charles Darwin. Well, the Father of Evolution might as well have been talking about the change that is currently affecting organizations in the digital marketing space.

“Pulling” Towards a Paradigm Shift in Marketing

Nowadays, consumers are more informed than ever, actively seeking out and “pulling” in information primarily through search engines to help them make purchasing decisions. This has caused a rapid paradigm shift from traditional marketing to digital and pull-marketing, creating confusion, as marketers struggle to play catch up to capricious consumer behavior. For organizations, it’s no longer optional to address this digital transformation, but a must. Companies such as General Electric that ironically positioned themselves as a “digital industrial” company, miserably failed their mission of becoming the industrial leader of the digital revolution. The former CEO of GE Jack Welch once remarked,
“If the rate of change on the outside exceeds the rate of change on the inside, the end is near.”

Prepare for the Ongoing Paradigm Shift

In July, Gabriel Ghavami, the Founder and CEO of GO MO Group, a digital marketing agency in Sweden dropped by the organization’s Pune office on a month-long visit to India. His itinerary included taking in the verdant monsoon sights and working with our teams to figure out how we can add more value to our clients. 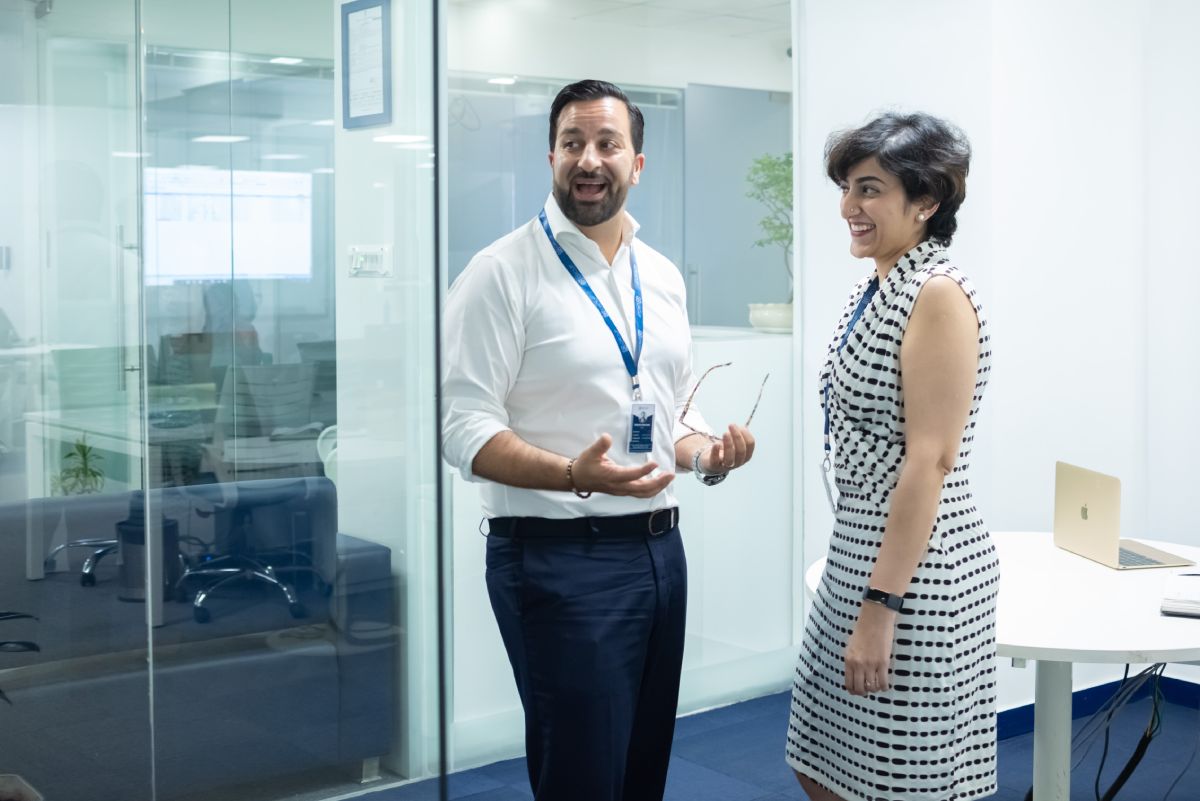 Shweta Dabholkar seized this opportunity and caught up with him for an interview about an event he recently attended at the headquarters of one of the largest companies in the Nordic region. We were curious and wanted an in-depth understanding of how Gabriel engages with key stakeholders at multinational corporations to help them prepare for the ongoing paradigm shift.

Setting the Stage for client Success

As an organization, we strive to be a thought leader when it comes to the ever-evolving world of digital pull-marketing. For us, it’s important to not only sell a service but also educate our clients, taking them along on a transformative journey into what we do, how we do it and the impact that it has on generating real business value (high ROI).

“One of my key tasks, once we enter new partnerships with larger clients, is to get as many stakeholders on the inside as possible involved. This to spread the word internally of the impact and key initiatives of our tasks. But also to help CMOs to internally market what they are doing, and how we can help them becoming internal superstars by solving key initiatives and immortality projects for the corporation. We always aim to educate and inspire all clients when it comes to the latest trends in pull-marketing, SEO and customer experience optimization.” 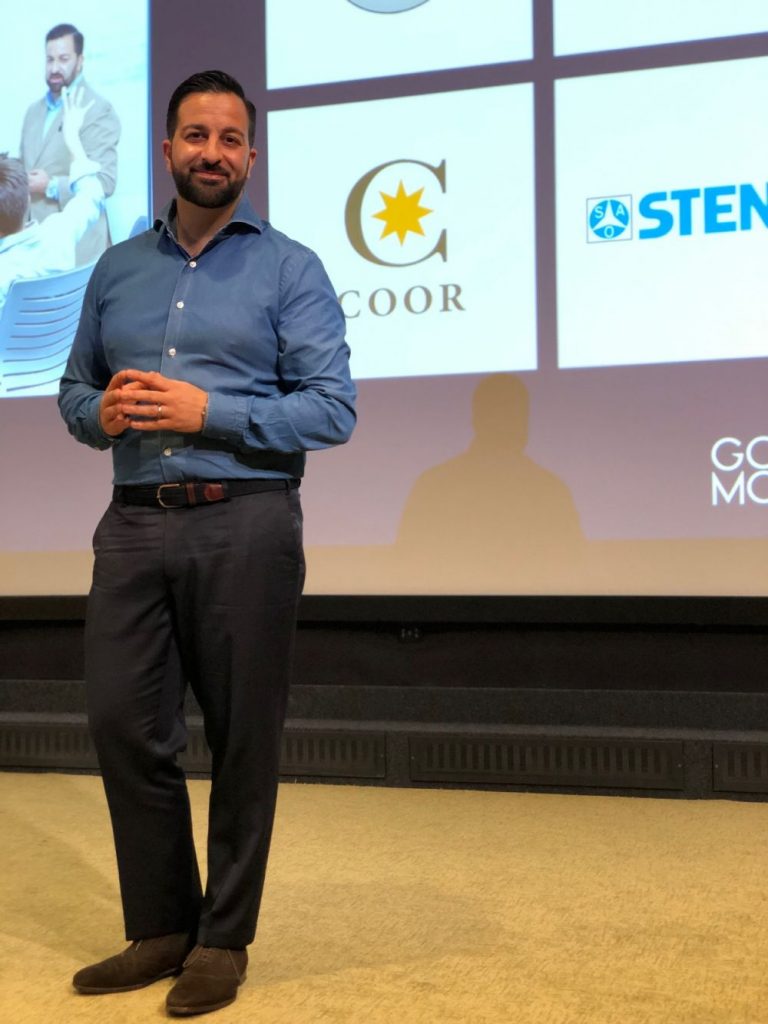 After formulating a digital strategy for a global Industry Leader within heavy industry, Gabriel was invited as a keynote speaker to the group’s headquarters in Gothenburg, Sweden. The company in question has a turnover of roughly USD 40 billion and over 100,000 employees worldwide.

The seminar attendees included stakeholders from various business areas such as top-level strategists, marketing managers, communication managers, as well as operational personnel from their Digital and IT teams. Interesting to hear was that all had very different concerns (regarding their own key initiatives) about how to adjust to the ongoing paradigm shift(s).

In our conversation with Gabriel, he highlighted that optimal strategy creation and execution in collaboration with the client is essential for achieving the highest ROMI (Return On Marketing Investment) for that specific strategy. Moreover, to increase value for the organization as a whole, in-house educational seminars should be conducted so that the synergy of the implemented strategy and relevant know-how is spread across all the departments to be able to leverage across the corporations and its various departments and stakeholders.

At the event, the key topics discussed were the knowledge-based monopoly of Google and digital customer experience optimization — why you need CXO and how can it be linked to the company’s key initiatives?

Up, Close & Personal with the CEO

We wanted to dig a little deeper into the themes Gabriel discussed at his event to share with our readers how they could potentially affect the work being done by other organizations and digital marketers. Thus, we began our tête-à-tête… 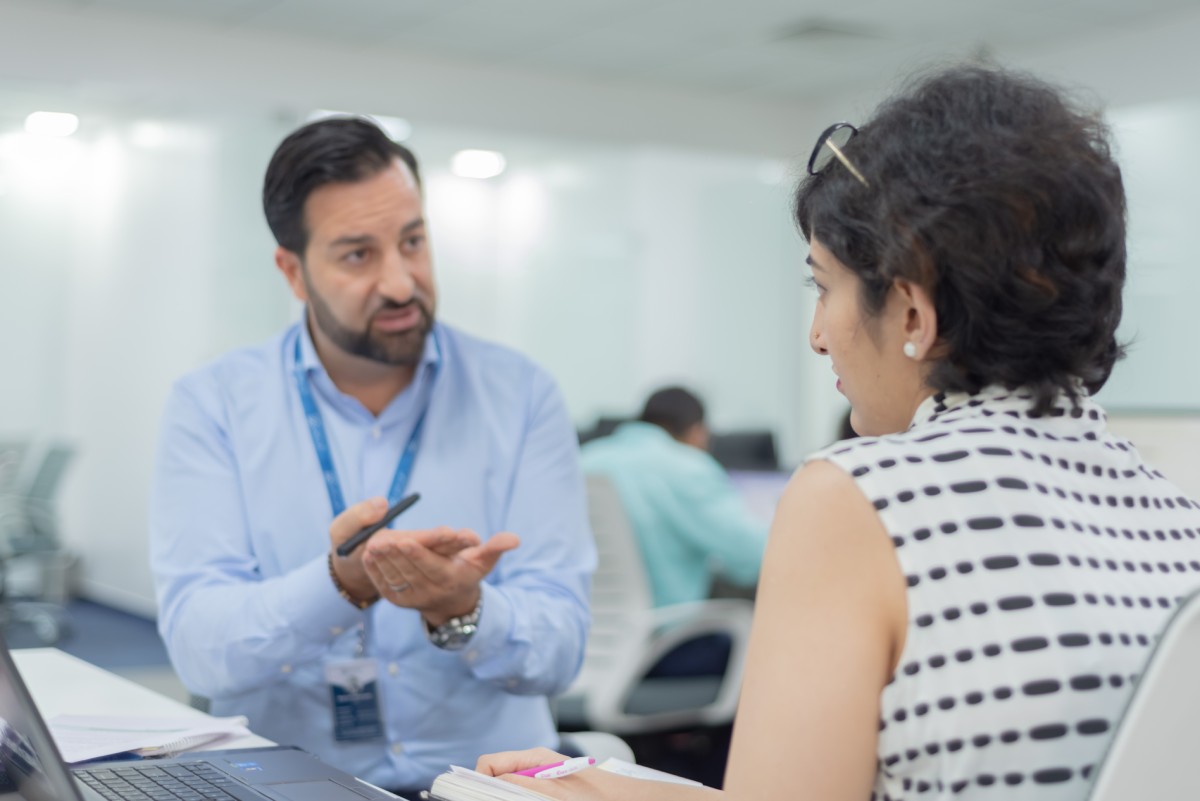 You’ve quoted that there has been what you consider “The Greatest Paradigm Shift in the History of Communication.” Could you elaborate?

There’s nothing new about paradigm shifts, they have been constant through History; the last big shift in business / industrial revolution was mass production in the early 1900s. The one we’re going through right now is within digitalization so it’s called the information or technology era. However, the biggest difference this time is the top speed at which it is approaching us. In the paradigm shift of communication, digitalization has placed the end-user in the driver’s seat. This completely diminishes all previous marketing strategies, such as Philip Kotler’s philosophy on the four Ps— product, price, place, and promotion. Cut to the present. The paradigm shift entirely ignores older dynamics. As the consumer is in the driver’s seat, organizations have to adapt to the changing world around them.

Why should an organization strive to be ‘customer-focused not organization-focused’ and where should they start?

In any paradigm shift, the companies that do change and adapt, win, while the ones that don’t, die. It’s basically “adapt to change fast, or slowly die”. Since this is more about going digital within marketing, companies must adapt to their clients or risk losing them. Going back to the industrial revolution, all the companies that did not adapt to the shift, perished; they no longer exist. Previously, companies took maybe 40 to 50 years to diminish. Now the speed is much faster. Digitalization has created a new, interesting aspect; it’s no longer big against small the way businesses used to operate. Now, it’s fast against slow. If you’re not fast and don’t adapt, you’ll die!

Today, not being customer-focused isn’t an option, companies need to understand that it’s business-to-human. It’s going to be a while till businesses start selling stuff to machines, if ever (laughs) so until then, there isn’t another way. The question is just how long will you be able to hold on to those old traditional ideals; how disrupted will your industry be. The less disrupted it is, the longer you’ll be able to hold on, but the change is there, it will happen!

What are the biggest challenges you think are limiting the potential success of companies in the digital space?

The biggest challenges, in my opinion, are people and baggage. It’s no secret that people do not like change. Now, what do I mean by baggage? Existing processes. Since we’re so heavily invested in traditional ideals, we need to change both. Getting people to change is very difficult because our monkey brains haven’t really developed that much for the last 2 million years; we almost have the same brains! Isn’t it kind of cool that despite this, we’ve achieved so much? (laughs)

Today, the biggest challenge within companies is people having to fight ignorance, fear, and guesswork. Through education, we can help them fight ignorance within the company towards the digital revolution and the paradigm shift in communication. The fear of not following market trends can be overcome by capitalizing on this paradigm shift. Last but not least, guesswork and assumptions can be averted by presenting data-driven information and having data-driven fundamentals for decision making.

“The three fights we have to win to be great are ignorance, fear, and guesswork.” 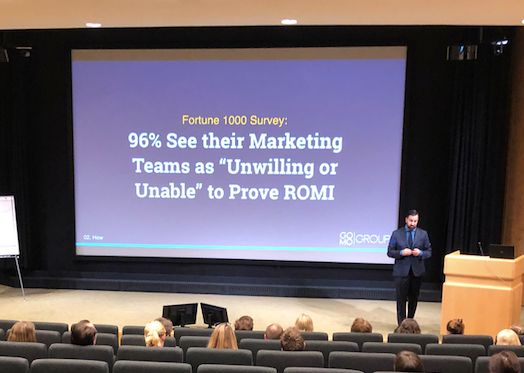 For example, a majority of the heavy industry manufacturing companies that we meet have a huge gap between marketing and sales. Most of them don’t have a clue about what marketing investments actually end up in sales. To back that up with some data, a survey found that 96% of the CFOs of Fortune 1000 companies (i.e. the 1000 largest companies in America by market cap) see their Marketing teams as “unwilling or unable” to prove return on marketing investment (ROMI).

Finally, how do you think pull marketing and SEO are changing the way companies do business?

I don’t think anything is changing the way companies do business but our clients. Let’s take our company, GO MO Group, as an example; demand and end-users are changing how we do business as an online marketing agency – we need to keep up. We must adapt; our SEO- and our pull-marketing strategies must meet our clients’ and then their client´s needs. Therefore, I rarely talk about just SEO, I talk about customer experience optimization (CXO); we need to optimize customer experience for our clients and that’s not going to change. The client will tell us what to do, we have data on that, and this data tells us what the client wants. Once we know that, we can take action to meet their needs.

There are no strategies that will change the way companies do business. We need to be user-focused. As a conclusion I want to quote former GE CEO:

An aspiring novelist with several years of writing experience in digital marketing and SEO. BBA in Finance, PGD in International Business and Creative Writing, as well as an MA in English.

How can your business get new business through digital channels?

We have extensive experience in generating business for B2B companies through data-driven strategy development and execution.

Reza has extensive experience in digital marketing, IT, and complex business development. Leads SEO and Google Ads projects for big and small clients.

Our insights on Pull marketing come from hundreds of customer assignments. Read about the trends in digital marketing and what conclusions we have been able to draw from previous projects. 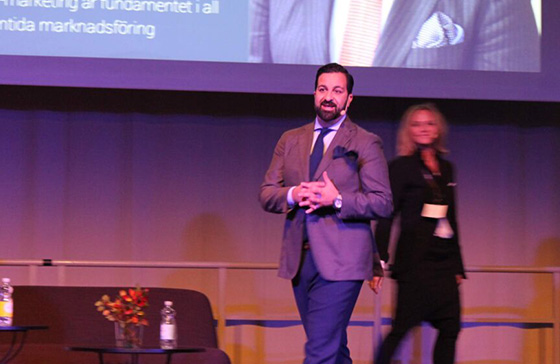 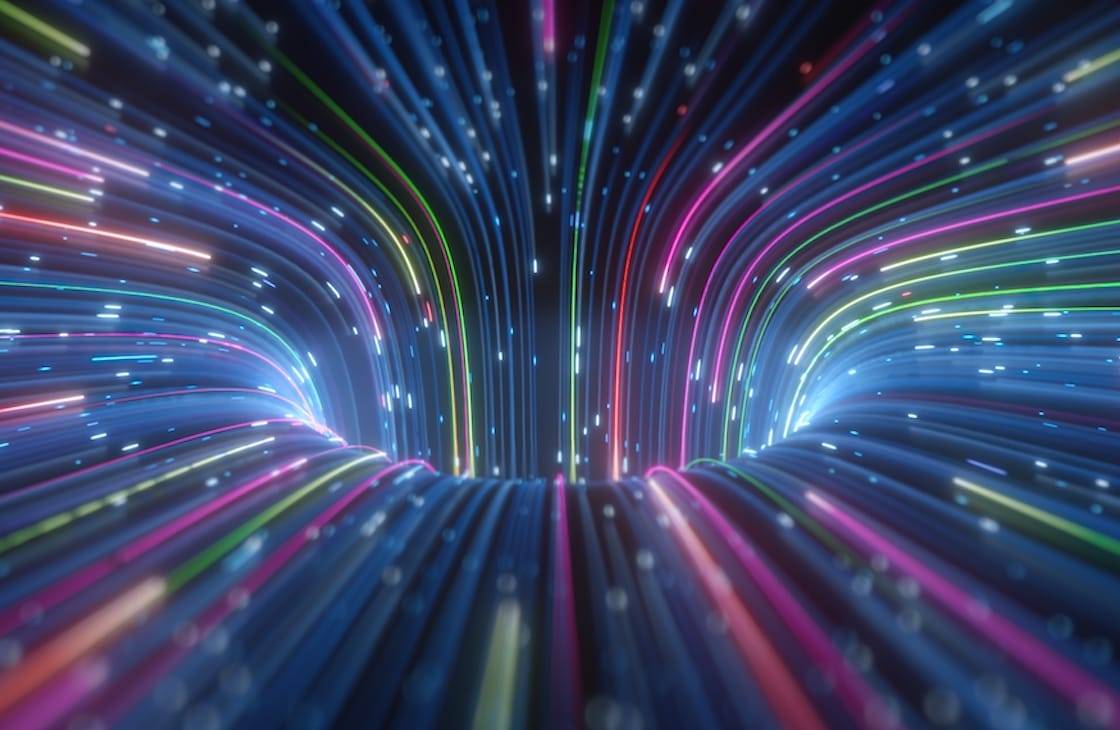 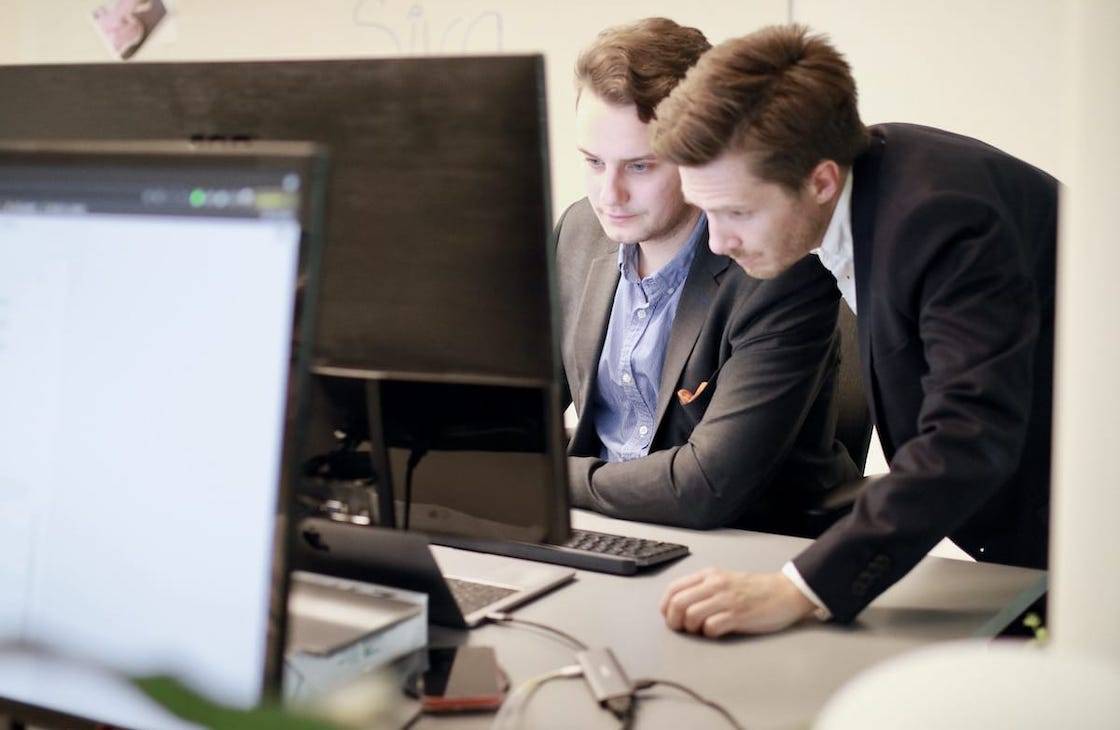 Online Advertising in the Cookieless Future 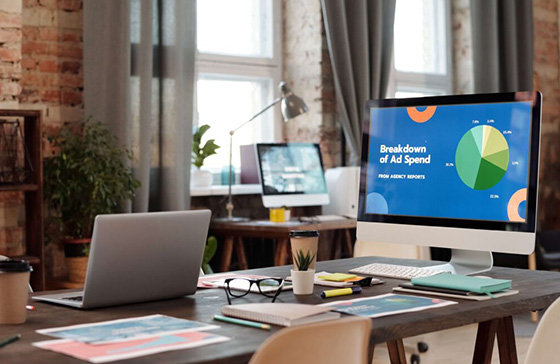 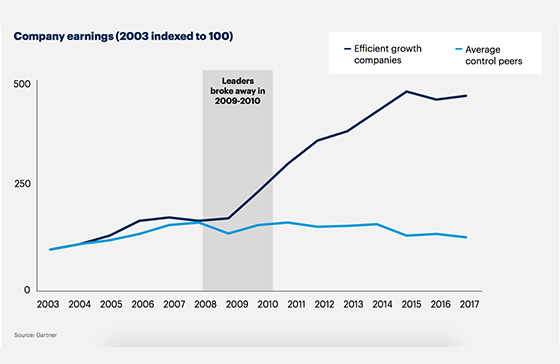 A cookie is a text file containing information stored on your computer or the device you use to visit a website. The cookie file usually contains the name of the website from which it comes and the lifespan (i.e. how long it will be stored on your device) as well as a value which is usually a randomly generated unique number.

Cookies are used to streamline the functionality associated with a website but also to collect information for the owner of the website. Cookies enable better customer adaptations on the website as it is possible to keep users apart from each other and thereby create a more tailored experience of the website. The cookie file is not harmful, cannot contain viruses or program code and cannot be linked to an individual or IP number.

Necessary cookies are needed for us to be able to view the website and for you to be able to log in. These cookies cannot be turned off. They are set based on what you do on the website and are used to remember your settings so that you can log in and your choices regarding cookies. They are active during a session and are removed while closing the browser.

Third-party cookies are cookies that belong to domains other than those displayed in the address bar. Google Analytics: Web analytics tool that collects data about how the website is used.